Students from the University of Sydney heckled foreign minister Julie Bishop when she visited the campus on Friday. They were protesting the changes to university fees outlined in the 2014 budget, which could see significantly higher fees under a deregulated system as well as higher interest rates on student loans

Abbott branded student protesters as ‘revolting (Source)’, an opinion already sustained by the now PM, after Julie Bishop was protested against, when she dared to enter a university after her party had only days before saw to university fees more than double for many university students, due to a cut in federal funding for education, and laughed openly whilst other devastating atrocities were read out by foghorn leghorn, smoking Joe Hockey, a set of CUTS put together with the assistance of what he likes to be known as, the Terminator: Mathias Cormann.

Sliming whining Pyne was also heckled on a live airing of the ABC Q&A television show. In the midst of debate about university fee deregulation, students unfurled a banner and chanted: 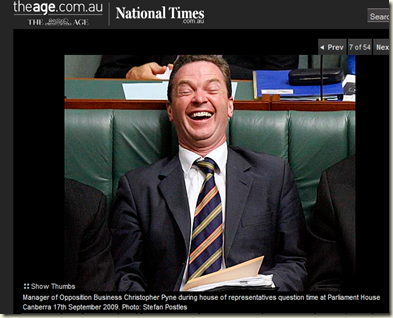 “No cuts, no fees, no corporate universities” and “Chris Pyne, get out, we know what you’re all about; cuts, job losses, money for the forces (Source).” The sad things is, they all look liked they enjoyed the protests and jostling. They appear to like the fact that the Australian people are extremely upset about the attack against our/their civil rights to a future, to an education, to health care, to helping our aged population, our disabled population, to our youth. The saddest thing of all, is that this new extremely right winged neo-conservative, neo-liberal party are in power because that is all they want, power. They appear to be power pissed and the Australian people are a mere annoyance along the path to their thrones or presidential suites.

In the words of Paul Keating “God help us all (Source).”

Australian Politics Nah… The Government Wouldn’t Do That!

Check but not Check Mate

The Federal Liberal National Parties Mid-Year Economic and Fiscal Outlook (MYEFO) calculations have jumped from a perceived $1b on the 13th of December, to ‘its going to be “shocking” by Bishop in a party room mallee, with Morrison weeping because of his governments immaturity in diplomatic circles and he now needs to spend an extra […]

Day 167 – And so Qantas steps forward, and all take a deep breath and wait….

Everything is on the table, the roads, the rail and even the sky. Everything is up for grabs as Qantas begins its appeal to make a play for Abbott government assistance, not tax payer monies but the repeal of the Qantas Sale Act: The Qantas Sale Act explained By David Flynn, to which we all […]

[youtube]https://www.youtube.com/watch?v=MP05oDv12jI[/youtube] Transcript: As a side note, I’ve seen Bill Shorten go off script and I have to say he does very well, he is quick witted, fiery and informed. If minders are trying to run a dirty Abbott campaign that Abbott did under Gillard, then you are wasting opportunities to understand the modern Australian voter. […]