It has been a devastating two weeks for many families around the world and for those here in Australia. Tragedies that should ensure a time of reflection and comradely support for our fellow human beings, instead we have opportunists seizing these moments to further their own ends.

There is a global air of War and we have a prime minister who is daring countries such as Russia to threaten Australia. Australia has a leader hell bent on driving us into a War, and any War will do.

So, why would Tony Abbott want to take Australia to War?

Well he is down in the polls and it is a well known practice that conservatives hold to; when a country goes to War, the sitting Prime minister, in Australia’s case, will most likely win in another election. There is also the matter of Tony Abbotts mandate to fuck Australia royally.

He is a capitalist of the worst kind, as is his front bench and with War comes prosperity to those countries that are able to manufacture weaponry and guess what, Tony Abbott has just cleared out over seas manufacturers from Australia, ensuring that many plants are empty, though still functional. Abbott could have saved Holden, but he chose not to and then dared Toyota to leave, so they are..

Tony Abbott and his cronyisms have done their utmost to paint a bullseye on the backside of Australia firstly with their treatment of Asylum seekers;

Then Bishop began her rounds by dictating to the region her dominance;

Well heres a tip for ya Juils, there was regional stability until you and your locker buddies took over and you don’t just pick on little countries, well not all the time, you have to pick and bad mouth major powers across the globe. Australia is an Island, just because you and your buddies are loud and brutish does not change that fact. We are an insignificant microbe in a petri dish the size of an apple pip. Get over yourselves and stop leading Australians into a War that does not need to occur.

As for the Abbott governments Xristain values, such as they are, what right have you to use Australian’s, Australia and her reputation to further your personal beliefs by backing genocidal actions by an abused who have honed their abilities to become the abusers?

There is a body count that accompanies your values;

3 Young Israeli teenagers murdered by no-one knows, except their phone call to emergency services clearly relates one of their attackers speaking perfect Hebrew. 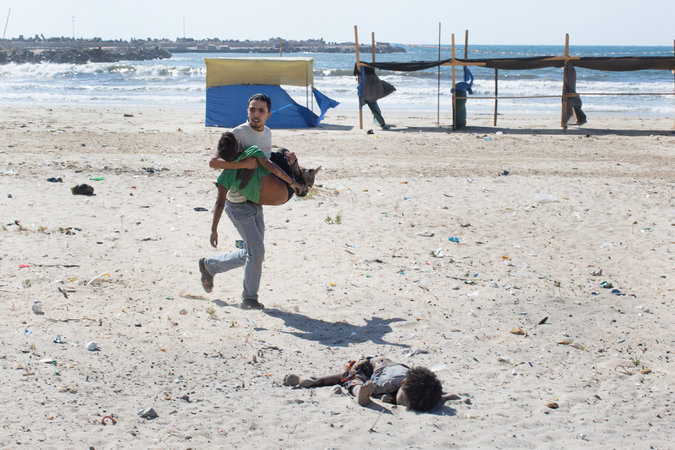 And lets not forget the 4 little Palestinian boys playing on the beach targeted and murdered by Israeli naval personal.

The illegal War by Israel against the Palestinians, and its intent is to commit genocide.

This is what Israel has done to Palestine:

Notice how much of the land they have stolen?

Now think about where all the people have gone that once lived on, and worked the land. Israel is on a power trip and the rest of the world leaders feel so guilty about the atrocities that occurred to the Israelites during the Hitler years that they cannot see that the abused has become the abuser and they literally allow them to get away with murder. Israel are doing to the Palestinians what Hitler and his cronies did to Israelis and if world leaders do not stop this atrocious action now, then they become party to genocidal actions too.

When does this become too much to defend anymore: Violent Israeli Right Wing Racist Thugs Spotted Wearing Neo-Nazi T-Shirts
The War is said to have begun due to the tragic murder of three Israeli teenagers ‘said’ to have been murdered by Palestinians, no proof is ever needed, Israel could be home to serial killers and we would never know because any death is automatically blamed on the Palistinians. In retaliation a Palestinian teenager was murdered and although a Palestinian child is tortured and murder every three days, this is still not enough to appease a viscous War hungry oppressor. What The Media’s Getting Wrong About Israel And Palestine — And Why It Matters.

What I grapple with, is the reaction to their deaths — Israeli lawmakers calling for a genocide and vengeance against Arabs, the torture and murder of 17-year-old Muhammad Abu Khdair by Israeli settlers, Israeli settlers’ continued kidnapping and abuse of Palestinian children, and now the Israeli military operation and violent assault against Gaza that is collectively punishing 1.7 million people who are already living in poverty. Gaza has been described by human rights groups as an open air prison with no where to escape. It has to end (Source).

A collection of books and letters, bound centuries ago and centuries apart feeds the basis of a belief system built on lies, deceit and desires. A book so cleverly collated that its destructive messages are still held tight today. This book feeds the ire of the self righteous to the detriment of all others. The most tragic of this situation, with Israels hand wrapped around the throats of anyone or country that dares to question their authority according to the Western worlds ideologies concerning a ‘bible’, is that the Israeli’s don’t even believe in your Jesus.

I feel so angry that Australia has a government that is able to allow genocidal actions based on a belief bound in an historical book, that for all intents and purposes, is fallacious to its core. A government cheering on such actions is a government capable of frighteningly horrific actions against anyone they deem subservient to their whims.

We should learn from historical actions, the atrocious and the good because we are now witnessing, again, what can result from sparing the rod and spoiling the child.

Its time for guilt to move over and for sanity to return. Israel has been allowed to do what ever they want for fear that they might use ‘Nazism,’ their historical tragedy, as a weapon against those speaking out against their actions. They are the spoiled child that is about to fall into the pond and drown, and they will take their cousin in with them if an authoritative figure does not smack them on the backside with an iron rod and send them to their room to think about what they have done, or are doing. They might well be passed all cognitive thought and instead of their room, may well already be ready for the padded cell.

I think that if those peoples who have been subjugated to the dominant oppressors, now and in the past, are able to rise above the;

Then one pissy little country that holds the world on its knees should be able to rise above their greedy, petty and self-righteous attitudes and begin to behave like human beings. And if they can’t, then they must be made to. Don’t spout your piss and wind rulers of the world self beliefs and not back it up. Just about every country has done things that they are ashamed of, or should be, but what Israel is doing, no matter what they have on you, you need to stop them now.

Theres been much conversation as to the where abouts of newly elected Motoring Enthusiast Ricky Muir by the media. The Senator has much to contemplate about the world of politics and his absence from media attention is a smart move, and thats because its not every day, that an everyday Australian becomes a Senator. Reasons […]

Kicking and Screaming: We do not own the land; we borrow it from our children Abbott

One could only hope that in the coming year the Australian Labor Party and the Australian Greens are firing up their policies and arguments readying for a well honed representation for the betterment of Australia and her people, all of them. But let’s not jump the gun here. The Liberal National Party must release their […]