So utterly defeated by the grassroots campaign, led by Cathy McGowan in Indi and championed by the people of Indi, the Abbott government has decided that they don’t really care what the voters want, and have appointed Ms Mirabella to the board of the government-owned naval shipbuilding firm ASC Pty Ltd.

With Tony Abbotts rhetoric that; ‘his Government has a ‘clear’ mandate,’ from the Australian people, only exposes this ‘unwise’ decision, that serves to reveal contempt as Abbott provides a prominent position for Mirabella. This decision only reveals an hypocrisy toward the Australian voters, a decision that only a Liberal government could, according to their views, confidently make.

Sensationally voted out by the voters in Indi, Abbott has totally disregard the voting publics mandate to not have Sophie Mirabella associated with governance. She was voted out and Abbottism sought a way to bring her back into the Federal Liberal party fold. I don’t know why I am so surprised, Mirabella stood beneath absolute degrading posters, denigrating women, along with Bronwyn Bishop and Tony Abbott, warming their little hands on the fires of burning effigies of the then Prime Minister Julia Gillard. 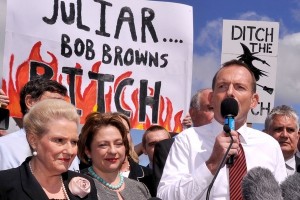 Yes, lets brings back this trio of respect and austerity, let Australia lead the way and show the world how a true Democracy can still be run according to the original ‘Birth of Democracy’ principles.

You do know that this is another broken promise Mr Abbott. You have, almost daily, brandished the ‘we have a mandate’ mantra, in the faces of the Australian people. Only to now inform the Australian people that although you believe the Australian voters gave you a mandate to do what ever you want, that you can completely disregard what the Australian people want because its good to be the King, and bring back some one so immersed in the tobacco industry, so un-informed about the electorate that she took for granted, so voted off the Island, someone that has all the makings of a typical Liberal candidate. Thats not a compliment.

You Mr Abbott have disregarded the Australian voters right to a democratic voice by seeking out a position for someone they voted out.